My name's Reijer. I live in The Netherlands. In April 2006 I bought my 1964 Lincoln Continental sedan (I'll post glamour shots in another section). In October of that year I found out the motor was in a bad state. It needed a complete rebuild because the rod bearings were knocking under load and one of the pistons had overheated and was now rattling in the cylinder. I decided to park the car (in order to avoid doing more damage) and made a reservation with a reputable mechanic who owns his own shop rebuilding American motors. After removal (by me) and disassembly (by him) the main bearings proved to be in a bad state as well. They were so far gone the mechanic was surprised the engine held oil pressure at all.

The original MEL 430 had been replaced with a MEL 462 from a '66 Continental. It was cleverly disguised as a 430 by putting a '63 430 manifold on it with '66 462 heads (which doesn't even fit properly). Also, the original nylon/aluminium cam timing gear was still there. It was badly cracked. If I'd left the engine idle for 20 minutes or so this one would have gone off.

We found the world's smallest van to drop off the engine at the rebuild shop.

Everything needed to be replaced except the block, heads, crankshaft, rods & valley pan. The cylinders have been bored & honed .030 The block has been align bored & honed .010, it has been decked, and has been painted. The valve covers, oil pan and intake manifold have been powder coated. The crankshaft and piston assemblies have been balanced. The heads have also been rebuilt with hardened valve seats. The crankshaft has been ground .010 I did have to order a set of connecting rod nuts because the previous mechanic had rounded these off... He also installed the oil slinger plate backwards (!).

It was a Frankenstein engine: a '66 462 engine block + '63 430 intake + '66 462 heads. This is stupid because the runners in the '66 heads are smaller than the runners in the '63 intake manifold... resulting in an obstruction of the flow of the air-fuel mixture. I needed to find a replacement '66 intake. After three weeks I found one not more than 10 miles from my home. What are the odds? You can find next to nothing for the 430/462 engines in The Netherlands - trust me - and there they were, just gathering dust at a farm. The farmer used 462s in the past for tractor pulling. He also had a very nice oil pan; no dents, no rust, no previous welding repairs.

At some point one piston had been replaced by a reproduction piston that weighs more than the originals...... makes you wonder.

A set of .030 pistons came from Egge. These pistons are close to OEM design. Other replacements have a flat top design which means less compression.

The camshaft needed to be replaced. Several lobes were too far gone. I found a new camshaft to OEM design by Falcon Global (on eBay).

The crankshaft needed to be reground & balanced. These marks suggest someone put a pipe wrench on it in order to turn the engine. This dumbass damaged the woodruff key the power steering pump attaches to.

KULTULZ gave me a tip that could prevent a lot of trouble: replace the original 430/462 oil pump drive shaft with this billet drive shaft from Precision Oil Pumps in Ca, (559)325-3553. The original is literally as thin as a pencil and really isn't up to the job. This replacement works for the MEL engines. It is an FE drive that is +.0375" Longer for Main Girdle Applications. This shaft is about .075 too long, but the MEL guys get them and grind that amount off the bottom (pump end) to make them fit. Just use a bench grinder. The shafts are $20.00 plus shipping.

The mechanic made these two water diverters out of old pieces of steel tubing. They fit into the block behind the water pump and divert the flow of coolant to the cylinder heads. OEM reproductions can be bought for 90 each I believe. They are pressed brass.

Up to 1964 the MEL 430 was equiped with two bronze block thermostats (positioned next to the water diverters). If yours are still there: remove and do not replace.

It's a good (and very clean) engine shop. They can do everything in house except for balancing the crank.

... breaking the engine in did not go as planned: after twenty minutes of engine break-in the oil pressure went down considerably. We shut it down and removed the spark plugs, fitted an external oil pressure gauge, and turned the engine using the starter. No pressure. Long story short, after removing the oil pump we found out it had gone bad. The plunger was stuck open & had to be forced back with a screw driver before it could move freely again. So the pump was pumping but a large part of the flow just went back straight into the pan. You wouldn't believe the internal scratch marks.

So a new Melling oil pump & that custom drive shaft were fitted. The drive shaft worked like a charm and for $20 it's a cheap piece of mind. Glad I had the foresight to have a replacement pump & shaft at hand. I'm also glad it was a bad pump because otherwise I would've had to pull the motor and bring it back to the rebuild shop. The old pump I bought at Egge had a steel Melling label attached to it but I couldn't find any # on the pump itself proving it was a Melling pump. The new one came from Lincoln Land. It did have the right part #.

In preparation of a freshly rebuilt engine I've cleaned and resprayed the engine bay. I've not taken it down to bare metal because the factory primer is very good. If hasn't come off at this point it won't come off. Most restorers even leave it on because modern day environmental friendly primers & paints aren't as good. The only rust was surface rust under the battery tray. I painted everything with two coats of POR-15 rust preventive paint and two coats of POR-15 self-etching primer. After that I painted the engine bay with spray cans I had made to match the colour of the exterior.

Another thing I did was getting rid of chromed pieces under the hood. A previous owner went chrome-nuts. I like original cars. No sense spending big bucks on a rebuilt engine and later regretting the fact I didn't paint things as they should be. This meant getting replacement parts because you can't paint or powder coat over chrome (well you can but you really shouldn't). I bought replacement parts on eBay. Things that went from chrome to black are: air cleaner housing & snorkel with flapper (kinda cool because these have often been removed and therefore a nice finishing and rare touch), fan shroud, oil filler tube & cap, gas pump heat shield, fender braces, hood hinges & brackets.

Thanks for reading (and thanks to several members of thelincolnforum.net for their kind help and advice)
Reijer
Last edited by reijerlincoln on Mon 29. Dec 2008, 06:28, edited 2 times in total.
Top

Kukuck Sir Reijer,
I have set se photo size to double whopping ultra 700 X700 pix. Inline img. is set O.K. too. We wait for se super heftig pounding Angriff of mass photos of yourr project.
Sorrry for se unkonvenient Operation om your Seite of se Frront. Siss modern american fiddelidou stuff brings me out of se Ordnung. I'm still in the prozzezz of learning itt.
Please be patient and don't give up on me, because I'm faithful to the troup and newwer newwer give upp.
Sänk You
Yours Theo

Verdammt, se software is buggy I sink. It seems to have cache oddities.
Please report alle Phänomene die are verboten in normaler weise.

Guten Morgen,
I testet the function yesterday but althougfh <I have set it to 700 X700 it says that the limit is 550 X 550. That's what I set it a day before or so. I'll have to check. Dunno if I can fix it quick. I wil post an announcement about the photo issiue within the next minutes

BTW. here's an other good laugh. I was actually searching for one of his videos where he fakes a German conversation with a mirror. Can't find it. http://www.youtube.com/watch?v=tGRq97_V ... annel_page
Best regards
Theo
Admin
Top

Theo, thanks for fixing the bug. It works!
Top

That is a really beautiful job! Thank you for sharing. I hope my current restoration looks as good as yours.

Thanks Rick. I'm sure it will.
Top

reijerlincoln wrote:
At some point one piston had been replaced by a reproduction piston that weighs more than the originals...... makes you wonder. 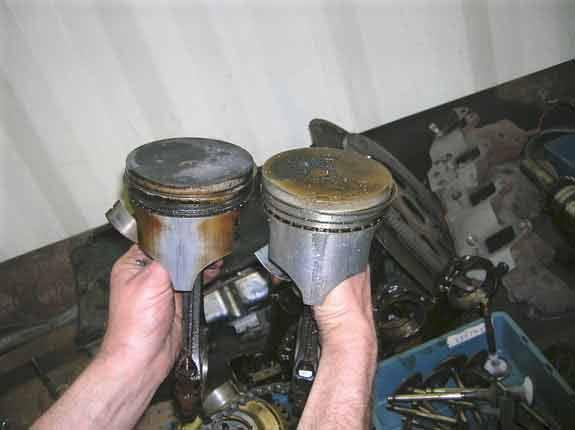 A set of .030 pistons came from Egge. These pistons are close to OEM design. Other replacements have a flat top design which means less compression. 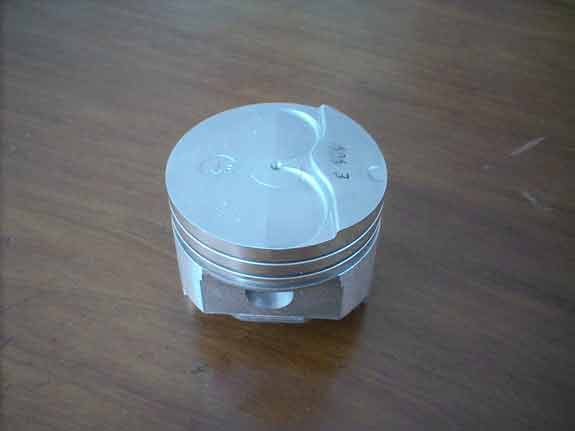 Beautiful presentation Reijer. This will undoubtedly help others that are unsure of what an overhaul consists of.

One thing if I may. The generic piston dome shape will result in more than just CR loss, it will defeat the origional design of the actual combustion chamber. To have this engne type function as designed and properly, the origional piston dome design (or slight variant) must be retained or the engine will simply become an air pump.
Top
Post Reply
11 posts

Return to “Photo Story Your MEL Engine Build Up Project”