I converted my 1959 lincoln to a Pertronix II Ignition system

To you M-E-L enthusiasts it’s a Hi –Fi Ignition system.

If you have a Petronix Ignitor, you need to bypass the resistance wire or the inline resistor. The Ignitor needs 12 volts, but the resistance wire typically only puts out between 6.8-7.2 volts. The reason it seems to be working is because the starter solenoids will output 12v during cranking. This was to create a hotter spark during start-up. But then once you are done cranking, the resistance wire takes over supplying only 7 volts to the points to prolong the life of the points. Since the Ignitor sees that 12v during cranking it would wake it up but running it continually on 7 volts will eventually lead to it failing.
The stock coil needs 7 volts. They will handle 12 volts at cranking but continual 12 volts will burn them out. The OEM coil will get 7 volts from the resistance wire / resistor. The problem arises when you go to an aftermarket ignition (like the Pertronix Ignitor) which requires 12 volts. The solution is that aftermarket coils have an internal ballast which means even though you are putting 12 volts to the positive terminal on the coil, they go through a resistor inside the canister which then only passes the 7 volts to the internal windings. The result is that if you keep the factory resistance wire you are only putting 7 volts to the Pertronix positive post, thus only transferring 4-5 volts to the windings which will result in a misfire at higher RPMs.
How do you fix this?
Bypass the resistance wire or the ballast resistor. You then can pass a full 12V through to the ignitor/coil.
If you are running a Pertronix Ignitor with a stock coil, you will run 12V to the Ignitor, but then pass it through a resistor on the way to the coil.

The best solution is to upgrade to the Pertronix coil and eliminate the in line resistor.

Pertronix 1 Module is nothing more than a pick-up with an amp circuit to trigger a switching transistor...which replaces the mechanical points. It converts the Ignition Coil Switching from Mechanical to Electronic. It is a great Technical advance for switching the circuit. Very few devices use mechanical switching today and if your computer were to use that type switching, it would take up 6 city blocks.
Probably the best performance modification for the $$$ that one can make to M-E-L or any car with points..........There is no comparison to the two systems.
__________________
The Pertronix II System has a micro controller, additional circuitry that also adjusts the dwell / spark timing through the RPM range ...With circuit protection as well.
A very cool device.

Warning:
You do not want to use the Pertronix II with Solid Core plug wires. However most wire sets we use are resistor type wires. 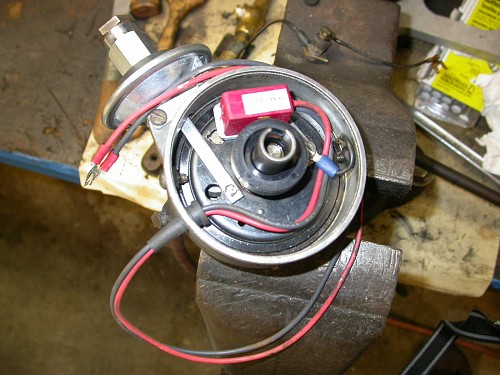 Is the 91281 used in the early and late MEL distributors?
Top

Thanks for posting all the tips.
Top

Return to “Tutorials Tips Tricks and How To. Written By Board Members”

Users browsing this forum: No registered users and 33 guests